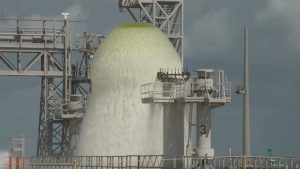 Well, NASA has recently done some testing of its heat/flame control system that helps keep the launch platform safer during rocket launches. Granted, with an ability to release about half-a-million gallons of water in 60 seconds, we are REALLY talking about a water gun with output rated at ~1,066,667x. Its ability to produce the 100′ man-made geysers is a nice effect. Granted, there appear to be three primary nozzles so each one has an output of a mere ~355,556x